Ten thousand equipment items sold in just five days. It’s both a monumental feat and just another day of business for Ritchie Bros., as the company sold items for a record 1,000+ sellers at its premier global auction in Orlando, Fla., Feb. 20-24.

More than US$188 million of equipment and trucks was sold at the five-day mega-auction, with approximately 38 percent (US$71+ million) selling to online buyers. A record 10,400+ people from 88 countries registered to bid in the auction, with buyers from the United States purchasing 79 percent of the equipment and international buyers purchasing 21 percent, from such countries as Germany, Australia and Vietnam. 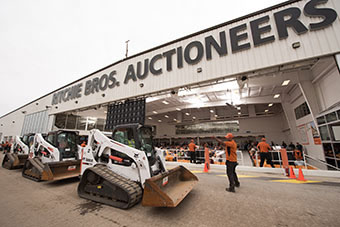 “We would like to offer a sincere thank you to all the sellers and buyers that made this sale a huge success,” said Ravi Saligram, Chief Executive Officer, Ritchie Bros. “Our February Orlando auction is a very important event in our auction calendar. Our customers clearly appreciated the diverse line-up of equipment as they turned up in record numbers, helping us achieve strong pricing in all categories throughout the week. As a result, we saw a nine percent increase in total gross auction proceeds over the same auction last year.”

Ravi continued, “Since we opened our Orlando site in 2003, more than US$3 billion of equipment and trucks has been sold through our permanent facility. We could not have achieved this staggering number without the loyalty of our customers and the ‘wow experience’ provided by our passionate, orange-blooded employees. We can’t wait to do it all over again next February.” 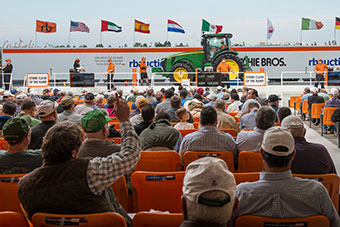 What customers were saying about the auction:
• “We sent things from all over the country here—we brought machines from Chicago, Pennsylvania, and Kentucky,” said Chrissy Wolfe, Equipment Procurement & Disposal Manager for Walsh Construction. “The Ritchie Bros. Orlando auction is the quintessential kick-off for the auction season—usually how equipment pricing trends here is an indication for how the rest of the year is going to go, so that was one of the main reasons we consolidated everything at this auction. We were very happy with the outcome; they exceeded our expectations. It was a great event and we are optimistic that the rest of 2017 will continue this trend.”
• “There are a lot of auctions in Florida in February, but Ritchie Bros.’ auction is the only one I participate in because of the sheer massive volume of equipment,” said James King, Owner and President of DeKalb Pipeline. “We do a lot of planning on how we are going to attack the auction; how we are going to look at things on certain days. I don’t think you get this kind of selection and choice anywhere else.”
• “It’s always fun to come to the big one. You can find everything here,” said Jorge Julian Gaviria, Owner of Agroservicios San Simon S.A. “For me, it’s all about relationships and trust. That’s what I look for in a company I do business with and it’s what I’ve found with Ritchie Bros.”