As the nation’s construction industry becomes more complex, with highly skilled managers in short supply, Ball State has created a center to prepare its students for the rapidly expanding field.

The university recently dedicated the technologically advanced and student-centered Robert G. Hunt Center for Construction Management during a ceremony within the recently renovated Applied Technology Building.

“Now more than ever, students must work collaboratively as part of highly complex teams,”Jones said. “Our students are learning the skills needed to become proficient managers who can guide multimillion-dollar projects from concept to completion on time and within budget.

“This center will play a critical role as they learn how to work with professionals from various parts of an organization to make sure that all needs are addressed,” he said. “Construction management is undergoing many changes based on team interaction. In fact, you can’t build anything bigger than a doghouse without a group of top-level professionals.”

The facility’s primary use will be for the program’s capstone course, which focuses on students working in four-member teams on a construction project. Each team will have its own physical office space for the duration of the course.

Students will have around-the-clock access to the center to work on assignments.

Jones noted the facility’s layout is based on current collaborative spaces at Hunt Construction Group offices in Indianapolis and other cities across the nation.

Honoring a Leader in Innovation

The center’s name honors the program’s strongest supporters, Diane and Robert G. Hunt, ’69. He is a national leader in innovation and excellence in the construction industry.

Hunt has been an executive-in-residence for two immersive learning projects at Ball State: the first, in 2010, focused on redesigning a transportation hub in Venice, Italy, and the second, in 2012, had students evaluate Hunt Construction Group’s brand image and develop a strategic brand image management plan.

He is the third generation in his family to head Hunt Construction Group as its chairman and CEO. The nationally ranked construction firm regularly hires Ball State graduates and is widely recognized as the one of the country’s premier builders of sports facilities and convention centers.

“There is a feeling of excitement for what this center will bring for future students — and obviously a sense of pride and humility in having been a part of a team that brought this to fruition,” said Hunt, speaking at the dedication ceremony where he and wife were named to the Wings of Beneficence Society for their contributions to the university.

Jones noted that Hunt’s presence will be felt in the new center, with several multicolored light shades over a conference table representing his penchant for wearing bright ties. The shades were created by students at Ball State’s Marilyn K. Glick Center for Glass.

“Mr. Hunt will always be with us in the building, overlooking our work,” Jones said. “We just have to look up.” 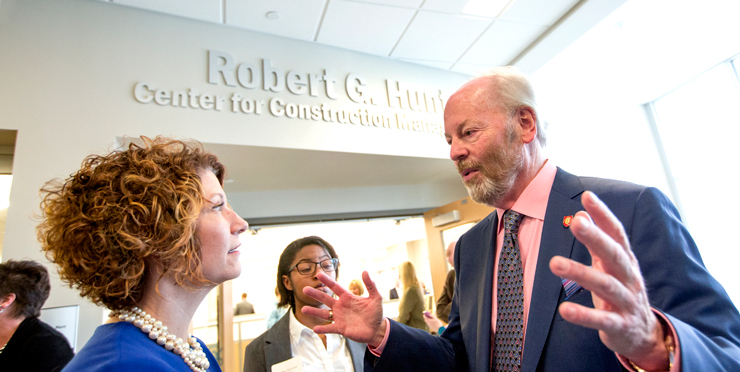 Robert G. Hunt (right) speaks with Jennifer Bott, dean of the Miller College of Business, outside of the new center.

Employment for construction managers is projected to grow a total of 5 percent from 2014 to 2024, according to the U.S. Bureau of Labor Statistics. In addition to expected industry growth, there will be a growing need to fill vacancies due to baby boomers retiring.

Ball State’s program had a 100 percent placement rate in 2015, with recent graduates starting at an average salary of $53,000.

Ben Lamb, ’11, who spoke during the dedication ceremony, credits Ball State’s construction management program with providing a strong education and internship experiences that helped him get hired by Hunt Group shortly after graduation. He is a scheduling engineer for the firm’s project support center in Indianapolis.

“The faculty at Ball State are among the best in the nation because of their construction industry backgrounds,” he said. “One of my profs told us, ‘All of us professors are here to give you the tools in your toolbox in order for you to go build whatever it is you desire to build.’”

Lamb believes the new center will provide students with a space that is similar to a real-world scenario.

“When I was a student, I would have thoroughly enjoyed this as a place to work together on group projects or even spend an evening doing homework,” he said.

Center Makes Quite an Impression

The new facility is being embraced by students and faculty and is catching the eye of campus visitors, Jones said.

“In the last several weeks, we have had quite a few potential students and their parents walk through the facility, and they are immediately taken by it,” he said. “We think that not only will the center improve the educational opportunities for our students but also play a major role in recruiting in the coming years.”