According to a new forecast from Bluefield Research, municipal utilities in the United States are expected to spend $629 billion on capital expenditures (CAPEX) over the next decade to address increasing demands on water and wastewater infrastructure. While the baseline forecast projects a 2.6 percent annual growth rate, in line with historical trends, Bluefield Research’s scenario analyses highlight a potential $107 billion swing over the 10-year forecast period.

“The myriad of challenges, including the deterioration of existing assets, changing demographic and industrial demands, and environmental stresses, is growing at a pace unforeseen decades ago,” says Bluefield Research Director, Erin Bonney Casey. “As such, the status quo is quickly fading as an option, if it has not already, to adequately treat, distribute, and collect water and wastewater, and maintain existing assets.”

Bluefield’s Maintaining Status Quo scenario forecasts a CAPEX split between water & wastewater to be $270 billion and $359 billion, respectively. Within this broader spend, treatment assets (e.g. plants, systems) for both sectors combined make up 52 percent, or $325 billion, of the total and pipe collection & distribution spend makes up another $185.8 billion, or 29.5 percent. The remainder is spread across other smaller segments, including pump and lift stations, storage tanks, and associated network hardware (e.g. manholes, valves, hydrants and pipe fittings). 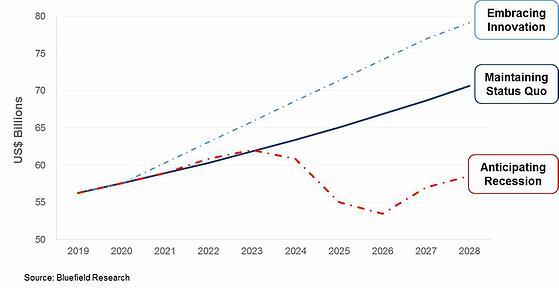 “Even in a mature water infrastructure sector, signals are pointing towards a crossroads,” noted Bonney Casey. “Further erosion of customer confidence in water supplies, however, should compel regulators to drive greater innovation and CAPEX on advanced treatment.”

More likely than any significant regulatory shift — beyond incremental policy changes at the state level — an economic recession would have a wider, sweeping impact on utility CAPEX. By accounting for historical impacts, including financial stimulus, Bluefield’s Anticipating Recession scenario could result in a 7.8 percent CAPEX decline over the next 1 0 years. Similar to historic downturns, the impact on utility CAPEX lags several years behind the rest of the economic cycle.

“More optimistically, solutions to all of these scenarios exist, whether they be economic or technology,” Bonney Casey concludes. “Much of this falls on the public’s shoulders to hold the regulators and leaders accountable for meeting our basic infrastructure needs that are often out-of-sight, out of mind.”

RELATED: Following The Money May Lead To New Infrastructure Legislation