The sunny skies of Orlando, Fla., traditionally provide a positive boost for attendance at The Rental Show, and that pattern proved true again in 2017. Amid a strengthening economic forecast for the equipment rental industry and a trade show floor that sold out for the fifth straight year, rental business attendance had strong increases over last year.

The attendance increases were a reflection of the positive mood overall at The Rental Show 2017. “The sentiment among attendees and exhibitors was one of optimism,” said Tony Conant, CEO of the American Rental Association (ARA). “Several exhibitors I spoke with were a bit surprised by the buying activity. They said that the buyers were replacing fleet and adding fleet, which means that the rental operators are preparing for growth.” 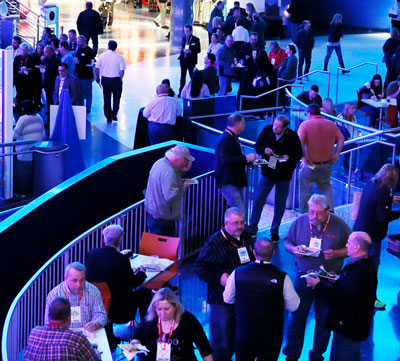 One of the companies with a very successful show was EDCO – Equipment Development Co. of Frederick, Md., a 59-year exhibitor at The Rental Show this year. “Our receipt count on the second day of the trade show was the best day ever for EDCO at The Rental Show,” said Jason Stanczyk, marketing director. “I didn’t have time to talk with anyone besides buyers, it was that busy.”

ARA Chairman of the Board Roger Vajgrt, Home Rental Center and Sales Co. in Marshalltown, Iowa, agreed with Stanczyk. “The show floor was busy, orders were written and the vendors I talked to were ecstatic,” he said. “People seem to be positive.”

It was a busy show for Takeuchi Manufacturing (U.S.) of Pendergrass, Ga., as well. “We had lots of traffic, made lots of quotes on the first day and had a steady stream of people coming back to close on things,” said Clay Eubanks, president. “People had a great year last year and they are very optimistic for the future. The optimism level is at an all-time high for us and for the rental industry in general.”

For Conant, who’s been ARA CEO since mid-November, his first time at The Rental Show “was a fantastic experience. The attendance exceeded our expectations and, more importantly, the initial feedback from the attendees was that this was one of the best Shows in years,” he said. “With the highest total attendance since 2006, it is safe to say that there is momentum building in the rental industry.”

The five-year forecast for the equipment rental industry revenue released by ARA in January showed a moderate strengthening compared to the previous forecast from November 2016. U.S. equipment rental revenue is projected to reach $48.9 billion this year and grow at an average rate of 4.3 percent over the forecast to top $56 billion in 2020.

For 2018, The Rental Show will return to New Orleans and the Ernest N. Morial Convention Center with a full day of educational seminars on Sunday, Feb. 18, and the trade show from Monday, Feb. 19, through Wednesday, Feb. 21.